Jardin du Soleil owners, Jordan and Paul Schiefen, had a great concept for a tradeshow banner design. They just needed some help making their idea a reality. They contacted InsideOut graphic designer, Jennifer Lozada, who created the design to reflect their concept and to suit the technical requirements of the banner company. 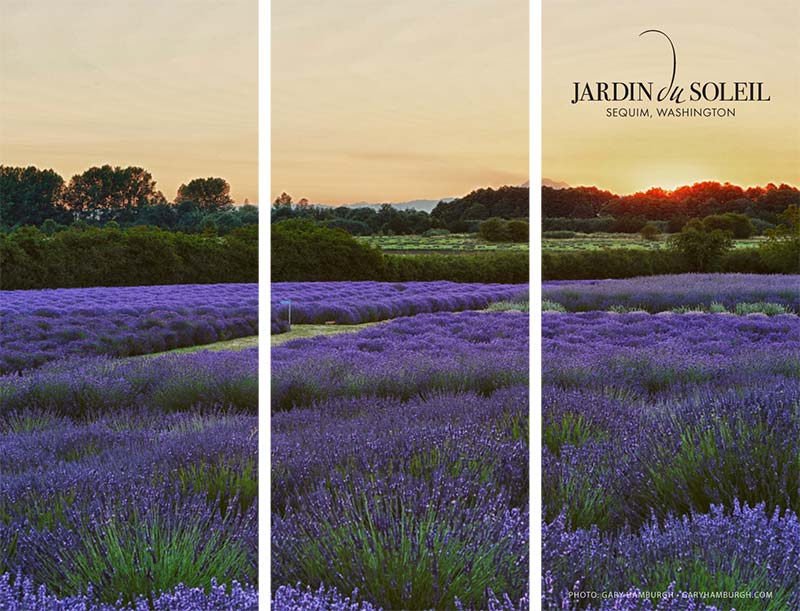 There are a lot of different products and producers for tradeshow graphics. The Schiefens wanted something versatile, economical and easy-to-use. After some research, they decided that a retractable banner would be their best bet. They decided to take one great photo and divide it across three separate banners. There are a number of advantages to this idea:

1) Striking visual presence: The 2.75′ x 6.5′ banner is pretty big. You can see it from a good distance. If you triple it by having one image across three banners, the impact is even greater!

It’s easy to get carried away and cram a lot of text and images on a tradeshow banner. Up close, it feels like the banner is large, so why not fill it up? The reason you don’t do that—from a distance, the imagery just become a whole lot of visual clutter. As a result, the entire banner fades into the background and people walk right past without noticing.

Jordan and Paul’s banners are the opposite of cluttered. One great image + their logo = a standout tradeshow banner design.

2) Versatility: The three banners side-by-side look great, but what if your tradeshow space is on the small side? One of the great things about this three-banner concept is that they don’t have to use all three. As space allows, they can opt for just one or two. And they don’t have to use them next to one another either. If needed, they can use the three banners separately to define different zones within a space. Because they’re the same size and overall image, they will have a nice visual consistency and won’t make the space look cluttered.

3) Simplicity: Retractable banners are great. They’re light, easy to move, and you don’t have to fuss with setting up a stand. The only things we’ve noticed about using them…To keep them in good working order, don’t get too aggressive about pulling the graphic up out of the stand. And handle the base with care—you don’t want to rattle and possibly break its components. These banners are for indoor use. Use them out in the wind and elements at your peril! 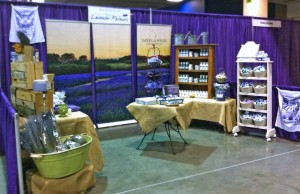 The Schiefens were very happy with how the banners came out. They sent us this photo of their award-winning booth. Yes, they recently won “Best Booth in Show” at the 2014 Northwest Women’s Show. They did a great job of staging and we’re glad the banners were part of their great-looking booth. Congratulations to Jardin du Soleil!

Contact us if you need help with a tradeshow banner design or choosing the right tradeshow graphic for your business.