Could Groupon and LivingSocial Be Doomed?

Facebook has just launched its second deals program: Social Deals. The new effort appears to resemble Groupon-style daily deals. The original “Facebook Deals” is now being called “check-in deals” to distinguish it from the new program.

Check-in deals, free to users, are mobile centric and operate much like conventional coupons. Facebook’s new Social Deals, must be purchased up front using money or Facebook Credits (its virtual currency).

Think this might be a big deal? It is and here’s why:
There’s the small fact of Facebook’s massive user base. Groupon and LivingSocial offer nothing but deals. Facebook puts deals in between pictures of your friend’s adorable new puppy. And with more than 600 million users, each of whom has an average of 150 friends, the deals will be in front of a lot of people using Facebook.

Coupon sites such as Groupon and LivingSocial use Facebook to get new customers and to get them to share deals with their friends. But Facebook’s Deals will be more tightly integrated into the social network, giving it a significant edge over the other Social Buying sites.

Facebook so far hasn’t disclosed how much it plans to collect from businesses that offer deals to consumers through its service, saying only, “There are no upfront costs, Facebook takes a portion of the proceeds only if a deal is purchased.” Groupon and others typically keep up to half of the revenue.

On the Consumer Side:

Info can be found here for accessing your Deals link from your Personal Profile.

Facebook’s Social Deals are Live in these five cities:

A list of Deals currently offered in Atlanta, one of the five test cities. 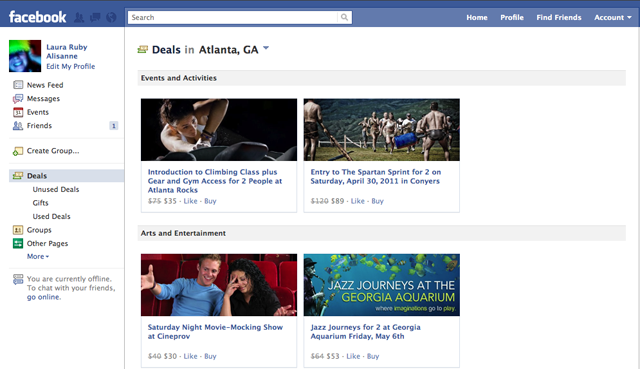 A Deal lives on your Fan Page and has its own tab.

Click “Buy” to be taken through the checkout process. Note where your “like” or purchase of the deal will appear.

Note at the bottom that Facebook will store your payment information for future transactions. 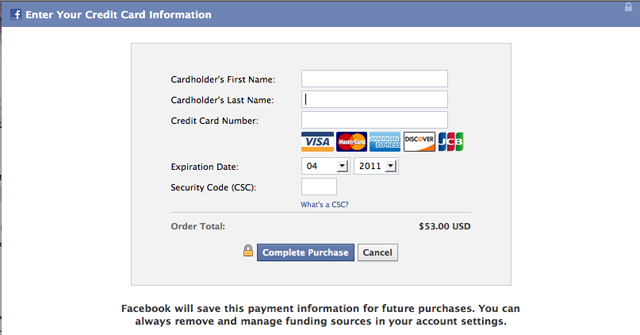 On the Business Side: 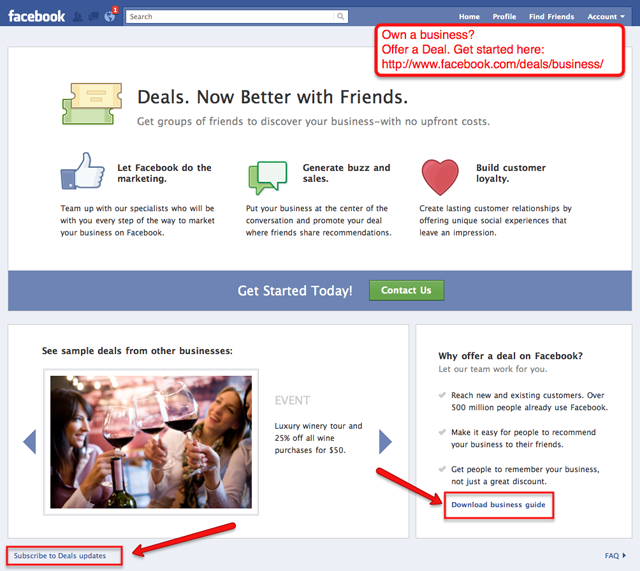