Expedia CEO Dara Khosrowshahi believes Facebook will be the next major website to enter the realm of the Online Travel Agency (OTA) by adding a Facebook Travel Booking feature to its immensely popular social media platform.  It certainly seems likely, given Facebook’s recent e-commerce additions to allow buying of products directly on their website.  Learn what booking Facebook as an OTA might mean to the internet sales for your bed & breakfast inn, dude ranch or boutique hotel. 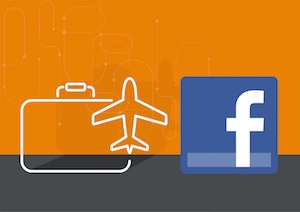 Why Would Facebook Be1 Looking at an OTA Feature?

It boils down to new revenue streams for the social media giant.  In a recent interview Mr. Khosrowshahi said:

“…travel is such a significant portion of e-commerce that Facebook will have a travel-specific product.”

Certainly other major websites think so.  Google rolled out its “Book on Google” feature last summer, a move that allowed Expedia to acquire Orbitz once the U.S. Department of Justice approved the acquisition citing Google was creating more competition.

When the Facebook Travel Booking feature launches it will create even more competition in the Online Travel Agency market.

One had to look no further than Book on Google to see the most probable set up for booking travel on Facebook.  Expect Facebook to partner with Global Distribution System (GDS) providers and develop a tool that lets participating lodging providers and online travel agents participating with those partners to show direct booking options in search results on the social network.

Earlier this month, Facebook began delivering Dynamic Ads for Marriott and Trivago on both Facebook and Instagram.  These ads correspond to Google Hotel Ads, which ramped up prior to the launch of Book on Google, so Facebook Travel Booking is a distinct possibility.

What Would Facebook Travel Booking Mean to Your Lodging Business?

As with Book on Google, a travel booking feature on Facebook will mean more competition in the OTA marketplace.  As the largest social media outlet, Facebook will be able to put its direct booking and Dynamic Ads search results out to over 1.5 billion users.  For distinctive lodging providers such as B&B inns, boutique hotels and dude ranches, this represents yet another reason to consider testing a Facebook Dynamic Ads for Travel campaign in the near term and testing a GDS solution once the booking feature rolls out and the GDS partners are announced.

Competition from and among large hotel chains and OTAs will be fierce.  In the same interview where Mr. Khosrowshahi predicted Facebook’s move into the OTA market he also said:

As with any paid campaign, it is essential that Google Analytics campaign tracking is used in links in order to evaluate their effectiveness in driving visits & revenue.